Of this list, SSR Communications was the original petitioner of the proposal to create a new commercial FM broadcast service class “C4” that would have been 12 kW at 100 meters HAAT putting it between Class A and C3.

The petition was in response to the petition made by GeoBroadcast Solutions that petitioned the FCC to allow FM boosters to originate separate content at times.  This item was put on public notice as RM-11854 and public comments were collected in April.

The BLPO Petition calls for the FCC to look beyond boosters for local origination but to also permit FM translators (as well as boosters) to originate up to  128 hours per week of separate programming without any restrictions on the type of content the translator/booster carries.  This means they only have to carry at least 40 hours a week of programming from the primary station.

BLPO also asks for these translator facilities to have normal 4 letter call signs with the suffix of “-FX” when the station is originating “limited programming content”.

BLPO claims that the FCC “set a new standard” for the coverage contour of all FM stations as the 45 dBu contour in relation to FM translator stations.  Their justification is the translator interference remediation rules §74.1204(f) and §74.1203(a).  Under that rule, a victim of translator interference can claim a specific listener’s location if that location is within the 45 dBu service contour F(50, 50) of the victim station and if based on a “undesired to desired” (or “U/D”) ratio study, the ratio exceeds a specific level.

First, a refresher on the translator interference rule and U/D ratios

To understand how the 45 dBu contour is suddenly this holy grail of translator protection, here's an example of how the current translator interference rule works.  Let's put a hypothetical translator on a certain higher elevation site assuming that it is an AM or FM fill-in.  The Victim and Translator are co-channel. The translator's interfering contour (red) does not overlap the protected contour for the victim station (green) so it meets the §74.1204(a) requirements.  After the translator turns on, fringe listeners that can hear the station are receiving interference from the new translator.  The listener's location meets the first prong because it is within the victim station's 45 dBu contour (orange).  To determine the U/D ratio, we first look at the service contour curve the victim station places at the listener's address (blue), we measured that at 49.5 dBu.  Next, we measure the interfering contour of the translator (purple) at the listener's address, we get 45.2 dBu.  To determine the U/D ratio, subtract the desired field strength from the undesired field strength (45.2 - 49.5 = -4.3). The rule requires that interference takes place on co-channel if the U/D ratio exceeds -20 (minus 20) dBu.  In this case, -4.3 does exceed -20 therefore, there would be interference. 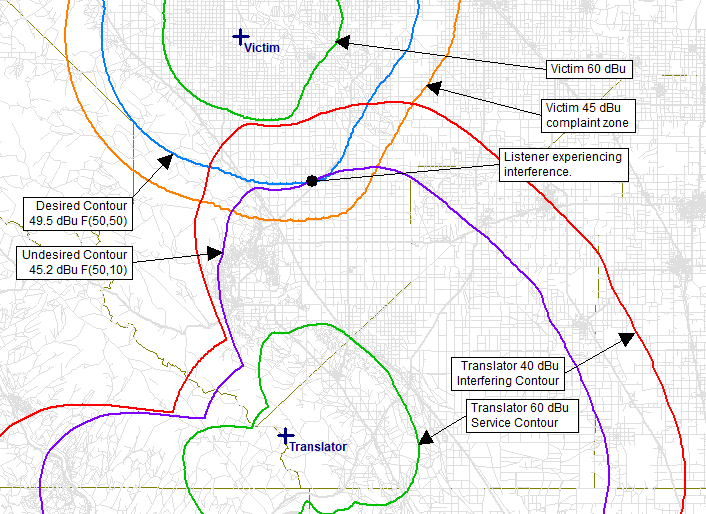 What BLPO wants to do to the "fill-in" rule

Now, let's say our "victim" station from the previous example wants a fill-in translator (say for a HD2): 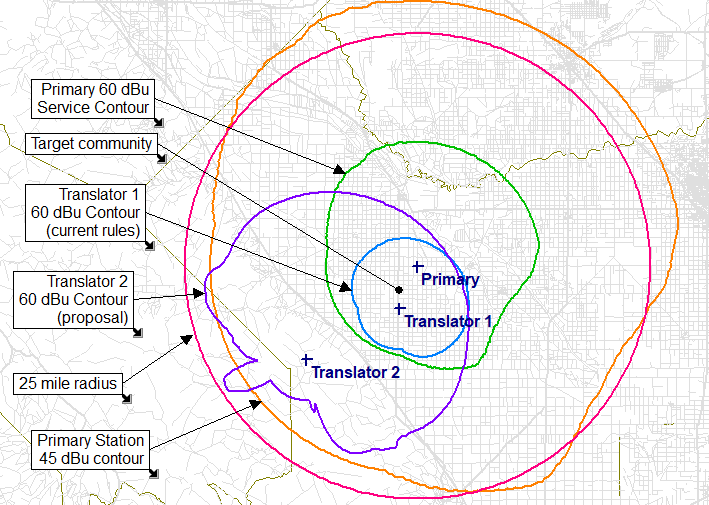 Under the current fill-in rule, a translator rebroadcasting an FM station must keep the 60 dBu translator service contour (blue) within the coverage contour (60 dBu except Class B1 [57dBu] and class B [54 dBu]) (green) of the primary station.

Now do you see why they want this?

Under the current rules for commercial, this type of translator would only be permitted in cases where the translator licensee has zero financial ties to the licensee of the primary station (in the past, this was done by municipal governments using FM translators to bring in out of town radio stations to communities without local radio stations).  This restriction does not apply to noncommercial stations.

While the narrative of this proposal does not suggest that boosters would be allowed to extend outside of their primary station's service contour, the way the proposed rules were written would suggest interpretation that boosters could also go out to the 45 dBu contour.  This is massively dangerous for not just LPFM but for all radio services as there are no service rules (with the exception of a first-adjacent situation) that require FM boosters to protect other stations (again, on the premise that a booster is required to stay inside the service contour (60/57/54 dBu) of the primary station.

This proposal does absolutely nothing for broadcast diversity.  In our opinion, the separate programming is more of a ruse.  If a primary station wants to run a different audio program on their translator, they can install HD and have the fill-in carry the subchannel. We need more voices and more choices. A commercial station should not be able to operate a separate station under the guise of a translator which will allow them to circumvent the local ownership rules.

Instead, this proposal is all about extending the service area where full-service stations can place a fill-in HD or analog program in an area where they can’t do it right now and to do it to circumvent the ownership rules.

From a technical standpoint, this proposal could result in a significant number of relocations.  We note that the relocations would have to be “minor” changes (overlapping service contours and same/adjacent channels only).  This could result in an increase in the number of FM translators moving from the middle tier (those with a service contour of 7.3~13.3 km) to the upper tier (>13.3 km) of LPFM protection meaning that the distances required to protect the stations would increase.

Because of the movement of stations and tier upgrades, LPFMs may fall into second adjacent channel waiver situations where even a slight move may not be possible because of a weak translator.

Because of the noise floor increases, the rise in interference package cases and the associated expenditure of scarce LPFM station resources to file complaints, the lack of ownership diversity these stations will prevent and a potential shift of locations of available LPFM channels as well as a reduction in available LPFM channels due to the “sub-class” increase of some FM translators seeking to increase their service contour size, REC considers this proposal as a MAJOR THREAT TO LPFM.

Therefore, at this time, this petition is at the first step to becoming a rule, there are still several steps go to.

Text of Petition for Rulemaking